When I travel I like to seek out the LNS to see what is different or their latest thing.  Better yet, if it IS the destination for a class or workshop. Most often my purchase is something unique to them like a project or thread bag.  Then of course, I buy a few of the same as presents for my friends. (They all do that too.)  The idea for these magnets were created with just that purpose in mind.


Subsequently, I have had many request for custom magnets. Usually to pair with a canvas but the most requested custom item has been to come up with something with a shop's logo.  It seems like we all have the same ideas in mind.  It has taken several months, a few experiments and many different versions and this is the result.


The first shop to receive these are Wool & Willow in Ohio.  If you are a LNS and are interested in Mag Friends or Fob Friends contact: sales@accoutrementdesigns.com


More new items coming in the next couple of weeks.  Follow the blog to stay informed of the latest shipment or you might just miss it!
Posted by Lisa at 12:25 PM

Trick or Treat?  A trick for them and a treat for us.  I have previously posted all the Halloween products available so here's a treat 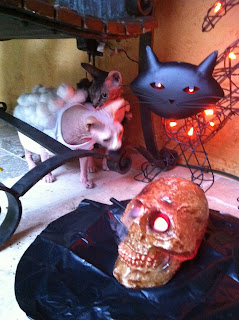 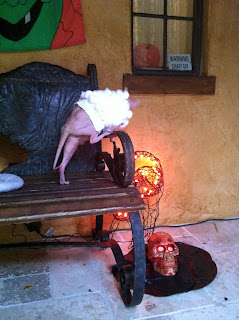 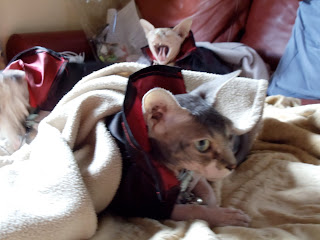 finally...it is a few weeks past due but beautiful!I designed this Acorn as one of the "Fall" magnets and many others over the summer for this season.  The Pears, a couple Halloween and Breast Cancer Awareness pieces all made it in. Other Halloween, November and Thanksgiving specific designs just did not come to fruition.  Next year for sure! Another learning experience for me.  However, I did get to slide this little pumpkin in.  I came across it at a local store. There were not many of them and they all went (but 1 - for me) to Amy's Golden Strand.
After seeing all the snow out West and the first Nor'easter this year, Fall is almost over for those of you who get it.  The pictures on Vicky De Angelis' blog, Mostly Needlepoint yesterday were spectacular!  We do not get anything like that in South Florida.  It is gorgeous here, don't get me wrong, but totally different!
Thanksgiving is around the corner and I have seen many new classes and clubs coming that the Mag Friends Acorn will be perfect for.  Either the canvas or your outfit.  I thought of both the Melissa Shirley piece for Aristeia's retreat and Kelly Clark's "An Elegant Thanksgiving" at The Needleworks.
Posted by Lisa at 3:01 PM

Baking was a hobby before I started stitching and I have always wanted to make a gingerbread house.  I thought stitching a gingerbread house was a better idea since it will last longer.  Besides, it has less calories and it will not end up in the garbage after the holidays.  I bought this canvas several years ago as a souvenir after the ANG seminar at Indian Wells.  I beboped around San Francisco for the day going to different destinations and needlepoint shops.
This year I thought about going to Needlepoint.com's  Gingerbread retreat in Asheville, NC.  However, I have another huge commitment for November and December plus the Holidays. So yet another year it comes out of the stash to be worked on.
Now to decide on the accoutrement.  I will probably have both magnets and more on there.  One or two magnets on a project does not work for me.  I usually have them in all four corners and sometimes the sides too. Either of these collections or a mix will go nicely with many of your projects and the upcoming holidays.  The magnets make great pins and presents.
Stitcherie has a challenge starting November 1st to the end of January.  "House" by Dan DiPaolo through Kelly Clark Designs.  Kelly Clark and Ruth Schmuff  have given ideas for threads, stitches and techniques to complete the piece.


Last week I did whip up 2 halves of a foe gingerbread halloween cake for a friends birthday with chocolate graham crackers and store bought items.  The second floor and roof were too top heavy to put on since it was in pieces. We decided this was an abandoned haunted house after a hurricane.

So much going on so fast and all new things!  I started writing this post over a month ago and have not had the time to take accompanying pictures.  Even more new things have been happening since.

I have plenty new projects in the works and lots of inspiration.

At EGA seminar I took Wild Pea and Longhorn Moth Medieval Panel by Jane Nicholas.  It has a "ladybird" or ladybug as we know it.  I just LOVE IT!
The following week Jane came to Miami and we did a Beetle.  Needless to say my project is on the right.  The left is the photograph of the finished piece.

Saturday I received a few new items.  For the Glamorous Collection:

For the Classic Collection: Valentines-
I can see one of these with the Love Letters Series at Chaparral

The last shipment I was expecting has not gone out yet but I hope to get it soon.
I have included a few pictures of some other samples I have.
Glamorous Collection:
Posted by Lisa at 1:54 PM 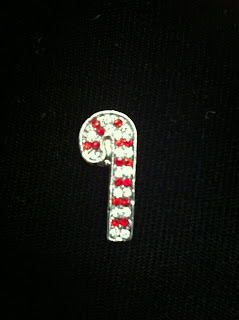 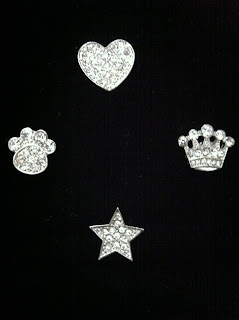 The first shipment of 3 that I am expecting in the next week came this morning.  Candy Canes are finally here!  It has been a 3 month ordeal. But they are great!  There are 3 new items, a Paw Print, Heart and Star.  As well as a replenishment of Crowns. All are about 1 inch size.


I do not intended on reordering many items, if any.  I may have samples or small batches to see if I like the quality, sizing or interest in a particular design. I prefer to keep things new and fresh. I have so many designs that I would still like to do.  I hope to offer around 15 different styles at any one time but always changing.

Going Stitching and chance to win...

Today I will be a guest speaker on Gone Stitching, Blog Talk Radio with Renee Seidman at 2pm EST.  If you have not listen to the show before listen to a podcast or tune in. It is a fun and informative show.  She has had many wonderful guest speakers in the past - designers, teachers, thread manufacturers and more.  Hint: There is a contest at the end of each show.  I am donating a fob and a magnet. You will have to listen to find out the "magic word" and what to do to participate. 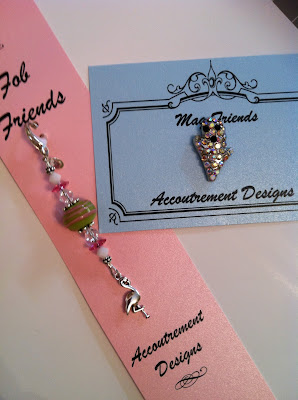 A Fob Friends Holiday Trunk Show went out this morning to Pocket Full of Stitches. Be sure to look them up or give them a call.   They will be happy to take your order or send you your favorite holiday fob.  More holidays and other popular charms are available.  Continue to check back as new additions are being added all the time.


As a local needlepoint shop (LNS) if you are interested in having a Fob Friends Trunk show contact sales@accoutrementdesigns.com 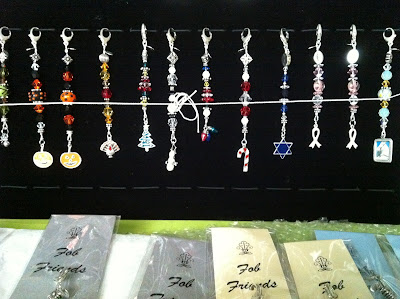 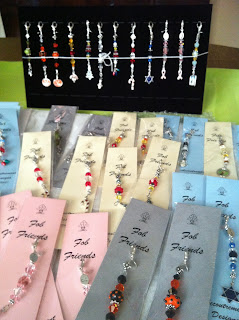 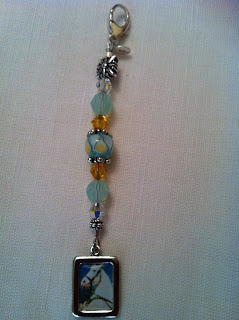 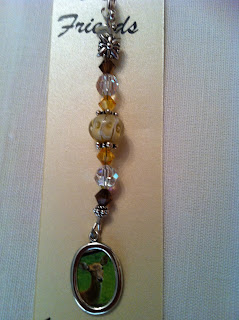 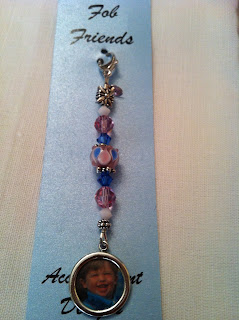 Some new items can be customized with your own pictures.
Posted by Lisa at 3:53 PM

Setting the Tone for Halloween

I think I have more Halloween stitched then any other holiday.

Fall season is upon us.

This is the time of year I like to relax when I stitch.  There is no objective or deadline. Just pick-up anything you are in the mood for before it gets too hectic with the upcoming holidays. Something old, new or relating to the current holiday.  The season is changing and it is starting to cool off but not yet cold, in most places anyway.
The first Mag Friends for Fall arrived today.  A friend & I have different series of Pears.  Both from Kelly Clark.  Her's is the series offered at many shops.
http://www.kellyclarkneedlepoint.com/clubs_pear

Mine is Kelly's 12 Days of Christmas offered through Pocket Full of Stitches a few years ago.  I have finished 1-6 and counting.  Maybe this new magnet will inspire me to get started up again. 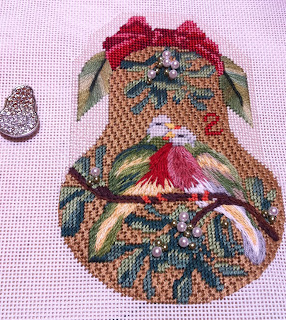 This is a business blog but that doesn't mean it has to be boring.  So in addition to posting new items, every so often I will share what and where some of my ideas come from both old and new.  I will add both Inspiration and Pairings pages to the blog.  This one is both.


So first up.  I love animals but I am partial to cats.  I have 3 Sphinx (hairless) cats.  Piglet is "Pink" and she eats and looks like a little piglet.  Then the baby is Blu or "My Baby Bonnie Bluebell" and she is a bluish color.  Hence the inspiration for the 2 cat magnets. They also hangout with me while I work. They are always willing to help and give advice. The eldest is MaryJane.  She is a "tortie" a calico if she had hair.  I do not have anything representing her yet, but soon. 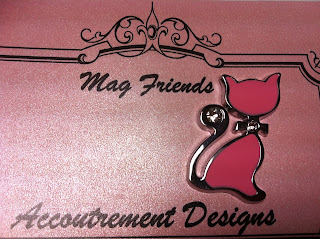 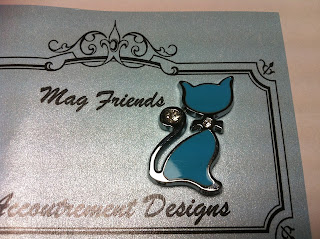 I live in South Florida and these colors have always been popular.
My current pairing canvas is this "Key West Cottage" by Needle Crossings that is almost done.  It will be framed and hung in my work room - formally known as my stitching room.  Vicky De Angelis paired the pink one with her "Deco Kitty" by Sharon G. (see her August 20th blog at mostlyneedlepoint.com) 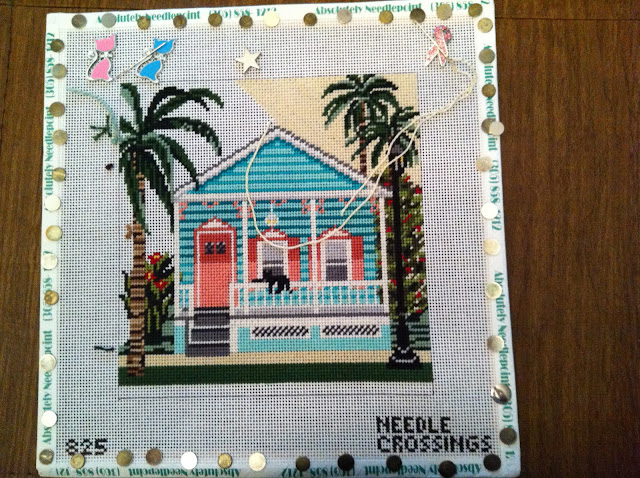